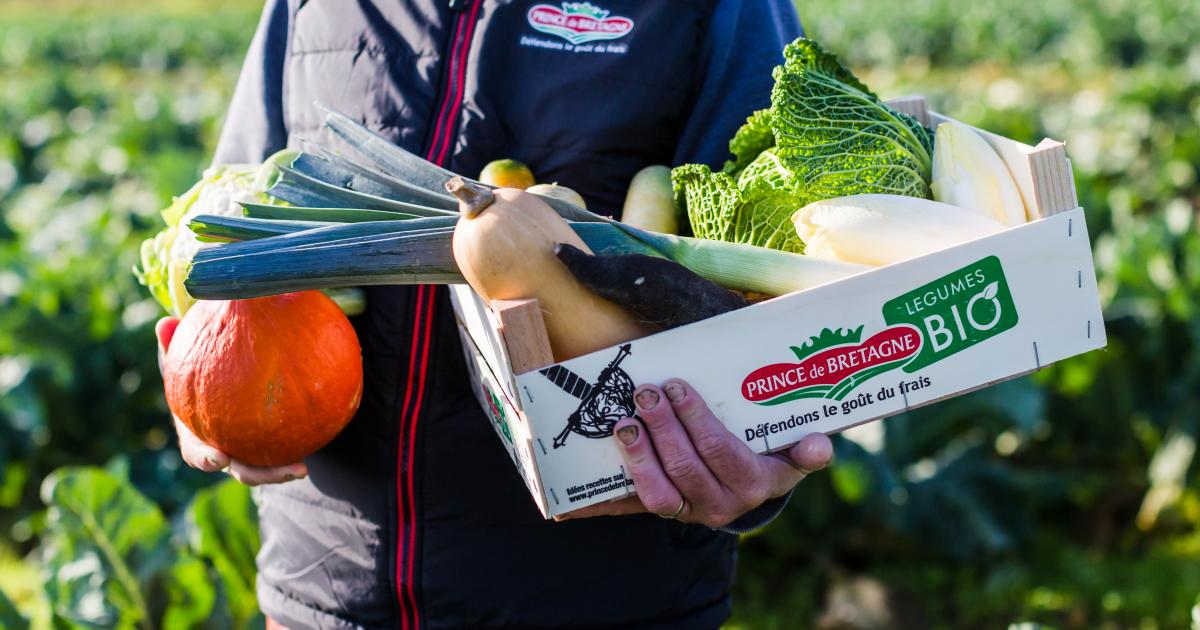 The Prince de Bretagne organic range began with a handful of pioneering farmers in 1997. At first, they concentrated on traditional Breton vegetables like cauliflower, onions and potatoes. Eventually the range expanded and other producers began organic production. We’ve grown from 35 organic producers in 2010 to 151 in 2022. Our current organic range includes 80 different vegetables grown in the open field or indoors. In 10 years, our production has quadrupled.
In terms of both product offer and volume, the development of our organic range is linked to the increasing number of growers throughout the Prince de Bretagne vegetable production area.

What are Prince de Bretagne’s commitments to its growers, and specifically to its organic growers?

The vegetables produced by the three northern Breton agricultural co-ops coordinated by CERAFEL (SICA Saint-Pol-de-Léon, Finistère; Maraîchers d’Armor, Côtes-d’Armor; and Terre de Saint-Malo, Ille-et-Vilaine) are distributed under the Prince de Bretagne brand. All Prince de Bretagne growers are located in the northern Breton coastal region and are members of one of these co-ops.
All the producers in our co-ops benefit from various services in addition to sales and logistics aspects. For example, we have internal research facilities such as the Terre d’Essais experimental station in Pleumeur-Gautier (Côtes-d’Armor), where technicians carry out open-field and indoor crop testing. Among other things, they test different crop management schedules and new vegetable varieties. As a result, when new growers launch their business, they benefit from the results of tests carried out in real growing conditions. Test results are available to all the producers who belong to our co-ops. There is therefore less risk than if they were to be in business on their own. Terre d’Essais research focuses on organic production. However, a parallel structure exists for conventional growers: CATÉ in Saint-Pol-de-Léon, Finistère.

What is the place of organic agriculture within Prince de Bretagne?

Nowadays, whether for conventional or organic farming, all our agricultural experiments are linked to the environment: water stress limitation and management, reducing synthetic inputs (in conventional production, as they’re not used in organic farming), etc. There are also concrete measures to support the transition to organic production. For example, all of our co-ops offer a subsidy for farms making the transition to organic production. Subsidies of €300/hectare for open-field production and €7,500/hectare for indoor production are provided during the 2 to 3-year transition period. This modest financial support helps relieve the stress of the transition phase until growers receive their organic certification.
Our co-ops also offer administrative support—to make a request for organic certification, for example—to producers making the transition to or getting started in organic production.
Another advantage of our organisation is that organic and conventional producers belong to the same co-ops, which provides them with opportunities to discuss technical and economic issues. This sharing of experience can motivate conventional growers to take the plunge into organic farming.

How do you present the Prince de Bretagne organic vegetable brand to consumers, and what messages does it send?

First and foremost, we adhere to organic farming specifications, and more specifically those that apply to organic vegetable production: open-field growing, zero synthetic inputs or pesticides on the crops, crop rotation to preserve soil quality, etc. On average, our producers grow between 5 and 10 different crops on their farms, as well as nitrogen-fixing legume cover crops. And of course, there are the annual checks carried out by inspectors such as Bureau Veritas or Ecocert.
However, in order to meet environmental challenges, we have to do more than simply meet specifications. Therefore, we also work on solutions to other issues such as reducing plastic packaging (French AGEC law) and reducing our carbon footprint by working on renewable energies. These projects represent real action in response to strong social expectations.

What are the upcoming Prince de Bretagne PR events for members of the distribution sector?

Members of the Prince de Bretagne team, along with growers and distributors (including Pouliquen), will be at the Fruit Logistica trade show in Berlin from 5th to 7th April, and then at Natexpo in Lyon in September, and Fruit Attraction in Madrid in October 2022.